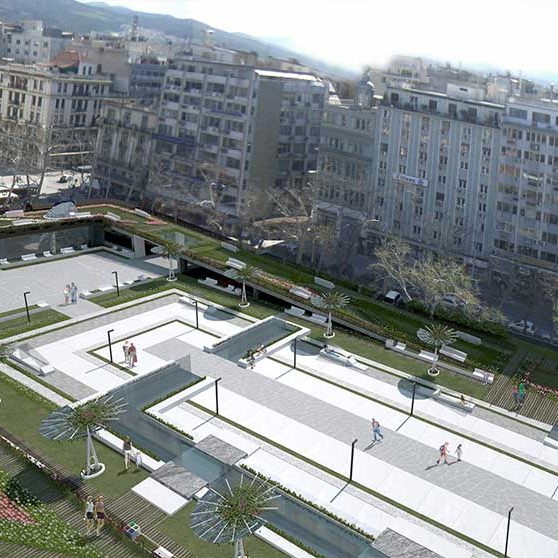 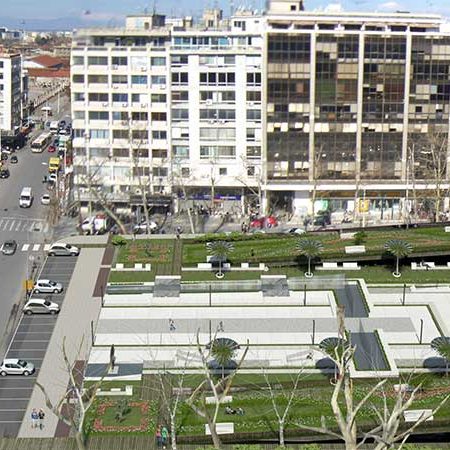 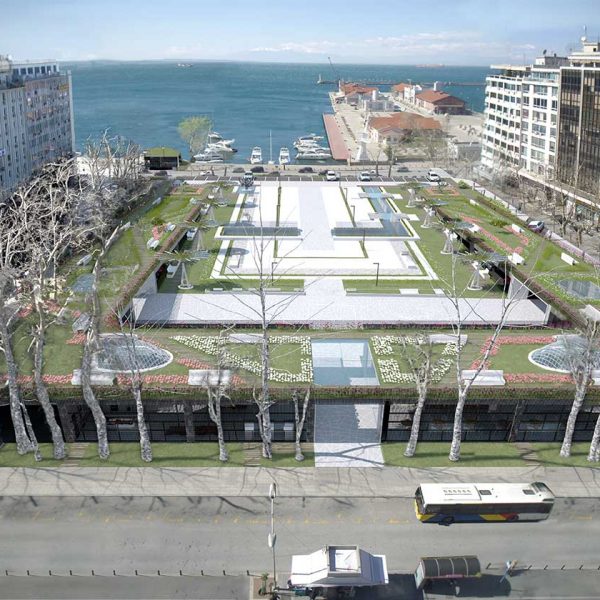 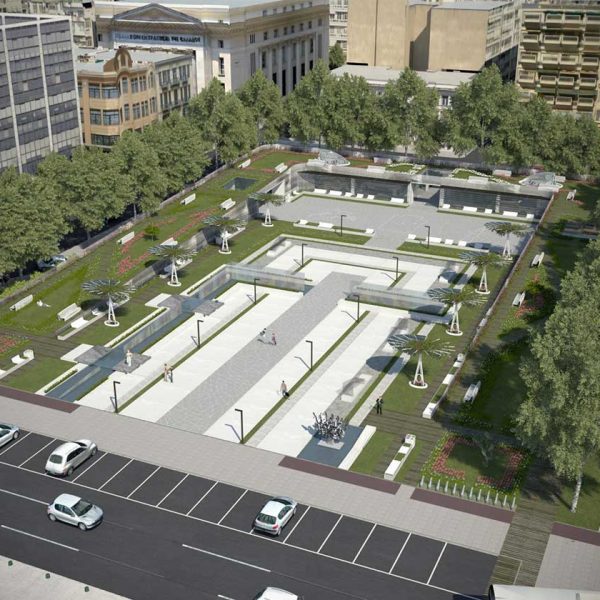 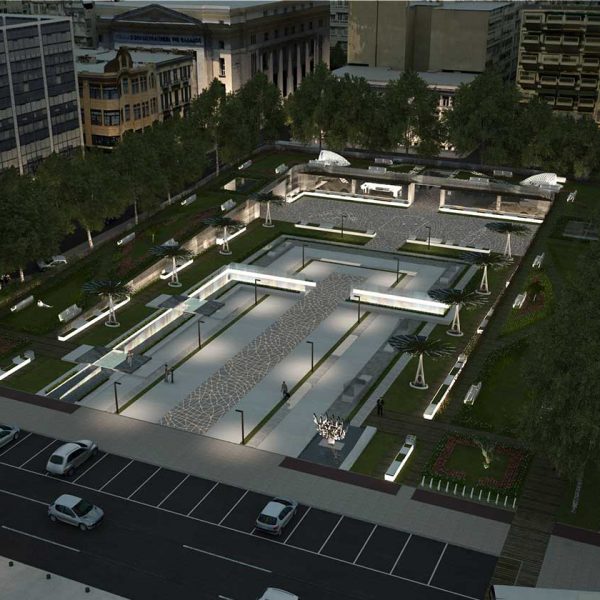 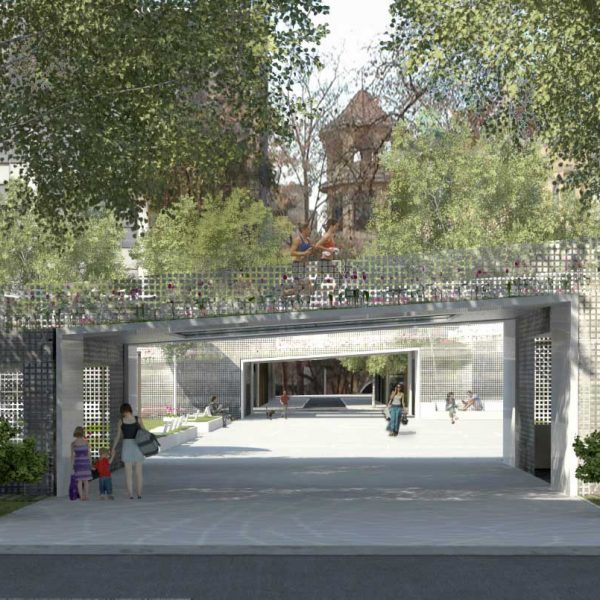 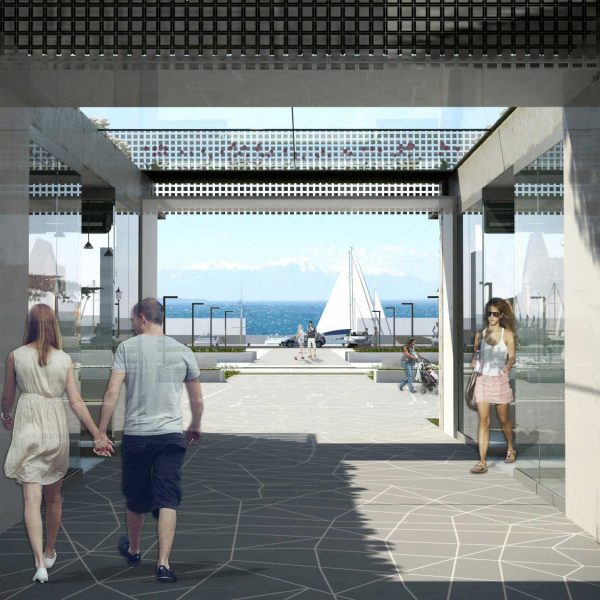 In cooperation with Skoularidis Ioannis

The main concept of the composition is a result of history of Liberty Square.

Important phases of history are detected and an effort is made to highlight them and make them the guiding lines of the proposal. Issues: design square for its residents and visitors for promenade and recreation and that it would be a place to remember the victims of the Holocaust and that it will support the development of the sea transportation and the future marina at the first pier Port of Thessaloniki’s harbor. Overall composition is completed with all other functional, aesthetic and architectural element added, which give the dynamics of the main entrance of the historic center of the city from the sea.
Major topics included are:
1. PREVIOUS LOCATION OF THE WALLS OF THESSALONIKI
Thirty meters northwest of the center of today’s Freedom Square was the previous location of the coastal walls of Thessaloniki, which is enhanced by placing the ancient finds of the walls at the same spot from archaeological services.
2. PREVIOUS LOCATION OF THE COASTAL LINE
Until 1870 the coastal line reached the middle of the square. Its configuration is dated to the mid19th century, when maritime fortifications were demolished. Inspired by this fact the element of water is placed in an artificial pond along the axis at the center of the square and parallel to the present coastline and in 2 perpendicular axes to it.
3. THE FIRE OF THESSALONIKI
Important historical point is the devastating fire of Thessaloniki in 1917. After the complete destruction of the square, it was redesigned with Ernest Hebrard’s plan, where reference is made by creating a glass ‘fire’ front fountain, which gives this feeling in an artificial way. It’s projection on the water can be replaced with any other theme chosen by the municipality, such as references to other historical data, etc., but also with visual effects for events held there etc..
4. THE RAMP
An up stepping, planted, U-shaped, ramped soil is placed in the perimeter of the square, creating a “gallery” view to the sea. The outdoor areas resulting in the upper part of the ramp can be used for walking and highlight the physical characteristics of the landscape and view to the sea, the harbor and Mount Olympus. It gives the impression that it emerges from the sea, but also endorses the town exit to it, which blends into the wider environment of the square, is bio-climatic with a green roof and is the sequel to the seeded green of the rest area. Public spaces are created below and will host the necessary functions to generate revenue for the maintenance of the square, but also to offset the total elimination of existing municipal parking of today.
5. REFERENCE TO THE 55371 DEAD JEWS
The square was a place of torment for the Jews of the city who were victims of Nazi atrocities. Jewish men of Greek origin, aged 18 to 45 were ordered to appear at Liberty Square to be humiliated. 6 to 7 thousand of them were gathered and humiliated by the Nazis. Then over 55,000 were transferred to concentration camps and killed. According to the Jewish Museum of Thessaloniki approximately 1, 500 escaped and returned. Inspired by the 55, 371 murdered Jews, the faces that the ramp creates are dressed with approximately 55,000 animated cells, that create a wave and refer to those who perished in the Holocaust. The atmospheric effects the cells create emphasize their spiritual presence in the square and complete the presence of the Holocaust Monument designed by brothers Glid.
The entire area between the ramp is divided into 2 sub-squares, north and south. The north one at the crossroads of two pillars of western and eastern entrance is a large and open space capable for collecting a lot of people, events, etc. The south is a square with a more green character in accordance to the remaining space, water, and forms the entrance to the ramp and the exit to the sea that leads to the info-center at the cape of the sea. Indoor facilities – Parking, café, public hall, multipurpose hall – museum, fire brigade, storage space, public toilets.
Outdoor facilities Parking, resting, gathering, recreation facilities, Wifi internet, 10KW Photovoltaic Power and urban installations that upgrade the place to a “smart” square with high standards and bio-climatic character.
Motion is freely distributed across the square and emphasis to accessibility for disabled people is given with suitable terrain, ramps, landings etc. Only elements that are added to the traffic circulation are public infrastructure for the approach of new outdoor parking, walkways for port and the new info-center. Further actions would have a direct impact on wider current traffic arrangements in areas with proximity to the square, something that was avoided.